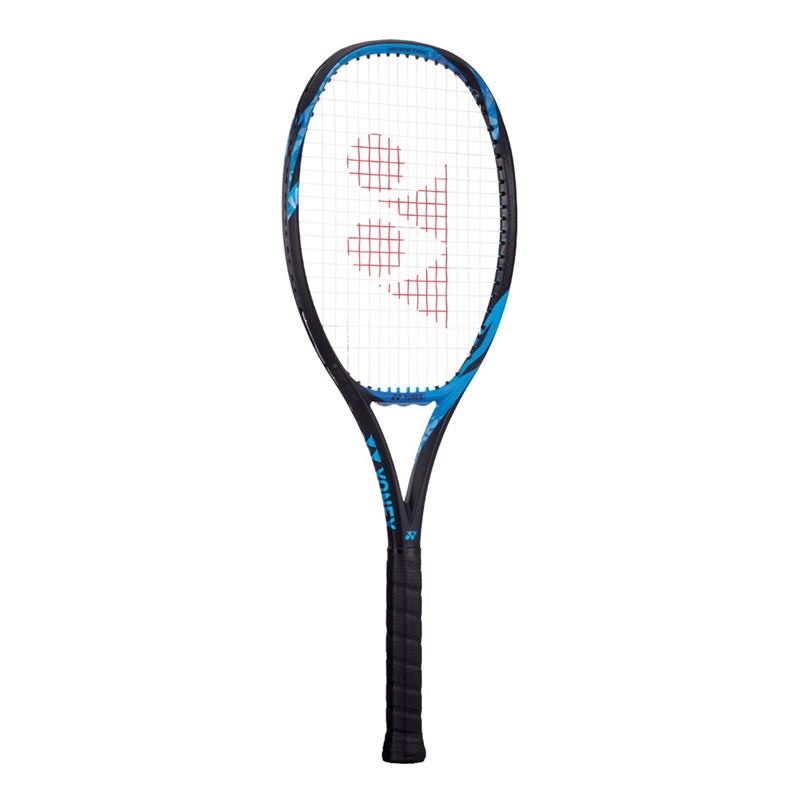 YONEX EZONE 100 (300g) BLUE PERFORMANCE TENNIS RACQUET The Yonex EZONE 100 (300g) Blue Performance Tennis Racquet is a medium-thick beamed frame (24mm/26mm/22mm) geared towards intermediate to advanced players with an already competent game, who are looking for a stick that soaks up unwanted vibrations and shock.  It provides access to ample spin and a pretty fair amount of power (Rule of Thumb: thicker the beam, more power the racquet will provide), while still maintaining control on groundstrokes and volleys. It also comes loaded with technologies that will be discussed in-depth below. The strung weight of the EZONE 100 (300g) Blue is 11.2 ounces, and the heft and rather stiff (68) frame, gives it great plow-through on offcentered shots not in the sweetspot.  This means you will get a more predictable trajection on your shots, even when you do not line up the ball perfectly. This is especially important for players whose footwork does not always cooperate, and find themselves out of position at times. Please note, stiffer frames can sometimes exacerbate arm issues, but the added technologies more than cancel this out with the EZONE 100 (300g) Blue. The 27 inch length of frame, 321 point swingweight, and 4 point head light balance provide plenty of stability, while giving the head a rather light feel to it.  This helps when whipping the head "through the zone" and imparting ample spin when necessary.  The spin-friendly 16x19 string pattern means there are larger squares in the string bed, allowing more of the ball to be gripped, which "bites" into it when brushing up and imparting heavy, heavy topspin. The wider range of string tension than on most frames, 45 to 60 pounds, gives the player more variance on whether or not they need more power and spin, or more control.  The rule of thumb is the stringbed works like a trampoline, and the lower tensions allow the strings to bend more, which slingshots the ball forward - just like a trampoline.  The lower tensions allow the cross strings more movement, and the resulting snapback propels the strings upward on whippy shots, and this imparts even more spin. Tighter stringbeds, conversely, have more control and tend to keep the ball inside the baseline, even on imperfect swings and volleys - do not swing on your volleys - just punch! This racquet performs best in the hands of intermediate to advanced players with medium-full strokes. (See Specifications tab f

Frances Tiafoe’s father, Frances Sr., was once a maintenance worker at the Junior Tennis Champions Center in Maryland. He even helped build the facility. When Tiafoe was a kid, he’d tap the ball against the club wall with his twin brother, Franklin, never imagining that one day he would be competing on the biggest stages in the world. “I didn’t choose this sport by any means,” Tiafoe told ATP Uncovered presented by Peugeot. “I love to say it: it chose me.&rd...
>Read More

Grigor Dimitrov is the 2017 Nitto ATP Finals champion and reached a career-high No. 3 in the FedEx ATP Rankings in November 2017. ATPTour.com looks at five things you should know about the 29-year-old. 1) His Best Season Came In 2017 Half of Dimitrov’s eight ATP Tour trophies were lifted in 2017. The Bulgarian opened the year with 14 victories from 15 matches, claiming titles in Brisbane and Sofia either side of a semi-final run at the Australian Open. Later in the year, Dimitrov cap...
>Read More

Jurij Rodionov talks about life at home with his parents, finally getting back on court, what hes been doing to pass the time and why the beard is here to stay... No player enjoyed a more successful month of February than Rodionov. The #NextGenATP star scored an impressive 15 wins from 17 matches on the ATP Challenger Tour, lifting trophies on both the indoor hard courts of Dallas and outdoor hard courts of Morelos. The Austrians big breakthrough had finally arrived. After claiming ...
>Read More

Resurfaced: What's A Typical Day Like At Roland Garros?

Editors Note: But for the COVID-19 pandemic, Roland Garros would now be underway. During the next two weeks ATPTour.com will look back on memorable matches and happenings at the clay-court Grand Slam, which tournament organisers are now hoping to stage in September. This story was originally published on 28 May 2018. I get asked all the time what day-to-day life is like as a player, what I do to prepare for events and what I eat. So now Im going to answer all those questions that my friends,...
>Read More

How A First-Round Roland Garros Turnaround Helped Murray To History

Editors Note: But for the COVID-19 pandemic, Roland Garros would now be underway. During the next two weeks ATPTour.com will look back on memorable matches and happenings at the clay-court Grand Slam, which tournament organisers are now hoping to stage in September. Andy Murray entered 2016 Roland Garros in tremendous form, fresh off his second clay-court ATP Masters 1000 title at the Internazionali BNL d’Italia. The second-seeded Brit, who didn’t drop a set in Rome, appeared pri...
>Read More

Editors Note: But for the COVID-19 pandemic, Roland Garros would now be underway. During the next two weeks ATPTour.com will look back on memorable matches and happenings at the clay-court Grand Slam, which tournament organisers are now hoping to stage in September. Before John Isner and Nicolas Mahut dominated world headlines with their legendary 2010 Wimbledon encounter, Fabrice Santoro and Arnaud Clement rewrote the record books at 2004 Roland Garros by playing the then-longest recorded m...
>Read More

Philipp Kohlschreiber has kept busy at home in Germany during the ATP Tour’s suspension of play due to COVID-19. Whether riding a tractor, going for a walk with his dog in the forest, or riding one of his wife’s horses, the German has certainly gotten to do things he rarely has had time for during his career. “In my youth I spent a lot of time on a farm because we lived in the countryside and my friends had farms. I used to ride with someone who drove the tractor digging up...
>Read More